Research work continues towards building a low cost adaptive optics system for astronomical applications. Experiments with the closed loop control of the tip tilt mirror and deformable mirror along with the 70 x 70 lenslet array, 300m diameter and 40mm focal length Shack Hartmann sensor are in progress. Real time operating system working on industrial PC bus such as PXI bus is chosen for this configuration.

A new wave front sensor is being developed using polarization shearing interferometric technique. The technique has already been established for large optics testing and evaluation for use during fabrication. The algorithm for the reconstruction of the wavefront from a single interferometric record is being worked out.

An adaptive optics laboratory setup consisting of a10 inch telescope in auto collimation mode, ( SH/PSI ) wave front sensors, tip-tilt and deformable mirrors and a turbulence plate has been built for experimentation. A new system design has been evolved with the provision to use either SH or LSI wave front sensor. Software for the wave front sensor uses the Lab-View platform.

The Long Trace Profilometer (LTP), for the metrology of Synchrotron Beam Line Optics, Version II (improved version) is being built for CAT, Indore. This development has placed India in the world map of LTP builders. This project is funded by BRNS, DAE.

The optical thin film laboratory is continuously engaged in experimenting various dielectric coating on glass and metal substrates. Considerable achievement has been a reached in developing a method for Gold coating on Zerodur substrates.

Specular polishing of metal mirrors is one of the newly developed technique specially for the sun shield panels of VHRR Passive coolers for the ISRO INSAT satellite program. Earlier the INSAT 2 series A, B, C, D and INSAT 3A satellites have flown with these panels. This has resulted in considerable savings in Foreign exchange. Polishing of the INSAT-3D Imager and Sounder coolers is under progress. 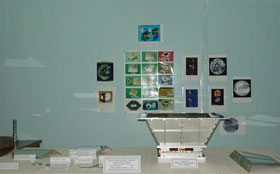