The total solar eclipse of the Century happened on Jul 22, 2009 over a belt about 200 km wide that started from near the Gujarat coast and through central India passed over Assam and Arunachal Pradesh to move on to China and the Pacific Ocean, offering the longest spell of totality surpassed only by the eclipse of Jun 20, 1955 before it. And while it happened, it cast a spell like never before over one and all. IIA continued to have its tryst with total solar eclipses since the birth of solar physics on the Indian soil in the nineteenth century and lived up to it during the eclipse of Jul 22, 2009 too. In India, the eclipse offered a very limited choice to the solar astronomers, by way of a low altitude of the Sun at the time of mid eclipse and the likelihood of the Monsoons in their full vigour. Therefore, an IIA team of six led by S S Hasan went over to observe the eclipse from its camp at Anji, a small hilly area near Hangzhou in the eastern China where the probability of sunshine was 60%. The experiments aimed to study the existence of waves in the solar corona and their nature. Not to miss the totality while over India, two smaller teams of IIA took chance and chose the best perceived places in Uttar Pradesh and Bihar, notwithstanding a low sunshine probability of 10-20%. They set up equipment at Arwal near Patna where S P Bagare, A K Saxena and J PA Samson went for their experiments on shadow bands and the videography of the eclipse, and at Saamne Ghat in Varanasi where R C Kapoor and Muralidas went for white light photography. The latter team was joined by B N Dwivedi and team from the Institute of Technology, Banaras Hindu University and D P Choudhary, California State University Northridge . There was also a collaboration with the Indian Air Force to fly from Gwalior a Mirage 2000 at about 40,000 feet into the path of totality to take pictures in which WG CDR V.Samyal, AIR CMDE S.Neelakantan, WG CDR Ashish Singh, SQN LDR Vijay Patil took up the active part. This was coordinated by K. E. Rangarajan and B. Ravindra from IIA while at the ground, and by V. Kamble of Vigyan Prasar. The teams succeeded in their attempts while the clouds opened up for the ground based observers just as the time of the second contact (C2) approached. 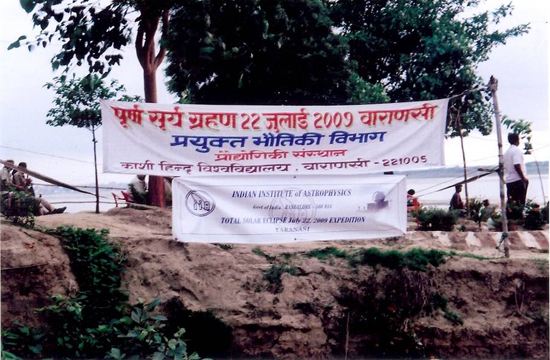 Fig 1. The approach to the Saamne Ghat, Varanasi.

Varanasi is famous for its Subah-e-Banaras which presents a breathtaking view of the city observed from vantage points along the banks of the Ganges in the morning hours as the Sun is just about to rise above the horizon. The Saamne Ghat is one such point, with a small but beautiful island of pearly sands in the middle of the waters. When the day started at Varanasi, there was an apprehension that eclipse may not be visible but as the Sun rose and the clouds began to thin out, the celestial phenomenon became increasingly visible.

At Varanasi, the second contact was to begin at about 06h 24m (C2) with the Sun at about 13 deg above the horizon at the time of mid eclipse. About a thousand people, school children and media persons gathered at the site to join us to watch the spectacle of the lifetime. A Public Address System was installed to announce the countdown for the benefit of the observers and everyone else present. As the C2 approached, all became quiet though the tension could be felt all over. The sky did not get as dark as was expected. It was a pearly blue ambience and just before the C2, one saw the glorious Bailey’s beads and a tiny diamond ring gradually fading and paving the way for the radiant corona to show up. People cheered, greeted and hugged each other as they got the breathtaking view of the corona in the sky, stretched in the equatorial directions. The corona could be seen up to several solar radii. Here was a beauty no words can describe and no camerawork can faithfully reproduce. When asked to describe, only the famous line from Jaishankar Prasad’s Kamayani could come to my mind - ‘Pratham kavi ka jyon sunder chhand’ – (as beautiful) as the first elegant lines composed by a poet! 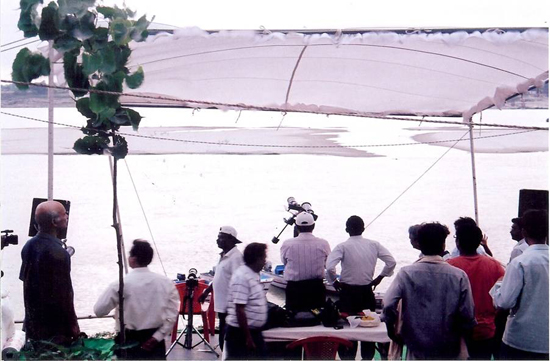 Observing from the Saamne Ghat, it was possible to locate Venus high up in the sky while some claimed to have seen Mercury near the horizon, as also the shadow bands on the ground. The planet Mercury was quite near the eclipsed Sun and at about 5 degrees above the horizon whereas the planet Venus, about 45 degrees from the eclipsed Sun, was close to its maximum elongation and shone at about – 4 magnitude. In a brief duration that last just 3 min 10 sec the grand spectacle ended with a parting gift of a beautiful diamond ring that erupted within 4-5 seconds. 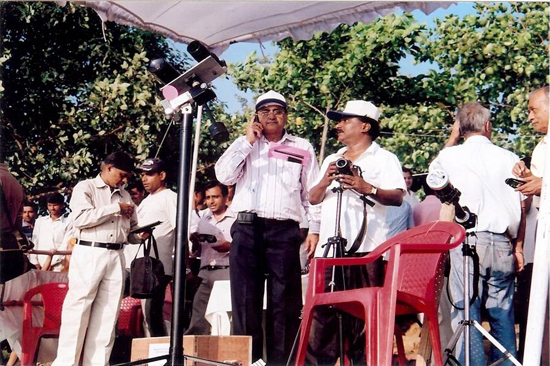 Fig 3. RCK on ‘phono’, shares the spellbinding experience with a news channel

We could hear the loud chirping of birds in great excitement well past the third contact (C3). A few photographs of the totally eclipsed Sun, taken by the various teams were posted on the IIA website. Interestingly, corona in the pictures taken at the Saamne Ghat Camp (Fig. 4) bears a resemblance to a picture taken with the same Questar during the1995 eclipse at Neem ka Thana, published as the cover picture of the Kodaikanal Observatory Bulletins, Vol 13, 1997, the Proceedings of the National Meeting on Total Solar Eclipse of Oct 24, 1995 held on Feb 26-27, 1996, at IIA, Bangalore. 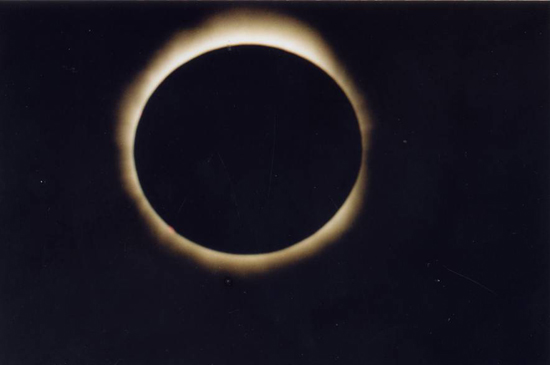 Fig 4. The total solar eclipse of Jul 22, 2009, taken on a 100 ASA Kodak film with a Questar by R C Kapoor and Mukul Kumar from the Saamne Ghat Camp of IIA and IT, BHU, Varanasi.

The reader may note that the years 1995 and 2009 are those when the Sun happened or happens to be at or near the solar minimum.