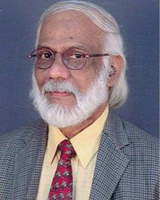 Padmanaban Govindarajan was born on 20 March 1938 in Bangalore,India. He is a renowned biochemist and a pioneer in Indian biotechnology. Currently,he holds the NASI-Platinum Jubilee Chair/Honorary Professor at the Indian Instituteof Science, Bengaluru.