Indian Institute of Astrophysics archives has important collections, some of which are more than 200 years old. Considerable effort has been put in during last two years for collecting, organizing and preserving and digitizing these materials. The collections are aesthetically displayed in a separate room adjacent to the library on IIA campus in Bangalore. 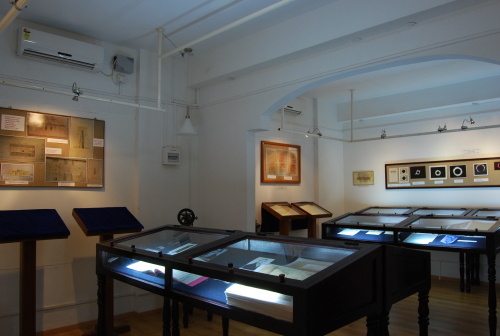 The process of setting up the archives involved various steps starting from drafting the collection policy to addressing the different preservation issues. As our institute has naturally inherited the library and records of the Madras and Kodaikanal Observatories going back to c.1786, the collection too has grown in parallel to include more than 5000 items in various formats such as manuscripts, photographs, maps, films, awards, framed materials, hand-drawn sketches, pictures, and instruments. Most of these items are of historical importance and environmentally sensitive .

The earliest hand-written manuscripts is the Madras Observatory Annual report of 1792 maintained during Goldinghams period. The other two important manuscripts are Madras M S records relating to the years 1794-1812 and 1795-1800. These have been digitized and the volumes will be given treatment for preservation. Several hand-written records of observations during Goldingham and Pogson`s time (1796-1805, 1812-1830, 1861-1891) have also been digitized. 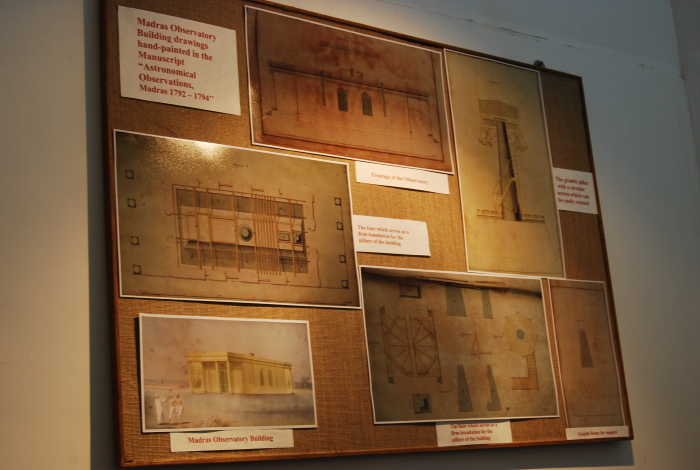 The various archival items and contents illustrate essentially the role played by the individual astronomers and the directors of our parent observatories and the institute and the description of the science done at different times. Hence we have chosen to classify and organize these items chronologically according to the directors.

IIA Library has taken the responsibility of arranging these items systematically contents wise, taking appropriate care to meet the storage specifications. The preservation process involves cleaning, fumigation, repair and rebinding. Some of the old hand-written manuscripts and scientific data sheets required photolaming and an encapsulation process to retain the originality and at the same time to give reinforcement, thus adopting the principle of reversible process. For a few rare documents, Indian National Trust for Art and Cultural Heritage (INTACH) is helping us to restore the manuscripts. The library staff have made efforts to index all these items, and soon the finding tool will be available for the users of the archives.

Among the published catalogues the earliest volumes are Goldinghams two volumes of astronomical observations brought out in 1824 and 1825.

Taylor`s catalogues of astronomical observations made at the Madras Observatory from Vol. I (1831) to VIII (1848) and the results of the Fixed stars made with the Meridian Circle for the years 1862-1887 in 9 volumes containing observations made by Pogson form a significant collection of IIA archives.

The oldest book in our archives Astronomia Nova (1609) by Kepler is a priced collection. The library has around twenty books published in the 18th century. This includes three volumes of Historiae Coelestis Britannica authored by Flamsteed the English astronomer, on account of astronomical observations made by W. Wales during the course of his attempted voyage to the South Pole (1725) and a History of the Royal Society by Sprat (1734). The Oldest journal volume is the Philosophical Transactions of 1794, and the oldest almanac available is for the year 1767. The library also has Greenwich Astronomical Observations made since 1765. Continuous runs of many astronomical journals like the Monthly notices of Royal Astronomical Society, The Astrophysical journal, Publications of the Astronomical Society of Pacific, and the journal 'Observatory' are available from volume one.

IIA archives also has a small photographic collection, special mention must be made of some of the old maps available in the library. More than 40 maps of important cities of the world printed in early 19th century by Baldwin and Cradock form a rare collection. Many G.T. Survey of India maps of 19th century have been scanned and stored in DVDs

A reference library of the archival material has been created in digital form, accessible from the IIA Open Access Repository (https://prints.iiap.res.in). For those contents for which the full text is not available they can be consulted physically in the archives with permission.

Two interesting items from the old manuscripts are presented here. The first is a reproduction from an early manuscript which confirmed that the Madras Observatory, forerunner of the Indian Institute of Astrophysics, was established in 1786.

The above is a beautiful hand-drawn image of the Madras Observatory in Egmore taken from the manuscript "Astronomical Observations Madras 1792".